Helping, My Way: An Au Pair in La Ciotat, France

I was at a crazy house-party in Orlando, Florida earlier this year. I’d met the host, Kevan Holland, the previous year and decided to pay him a visit – this guy below about to slide down the stairs, haha!

Kevan, Sliding Down The Stairs!

To my surprise it was a totally different crowd and there were only one or two of the people I’d met the year before. So, again, it was a case of chatting away and making some new friends. Awesome, I love that. Here they are… 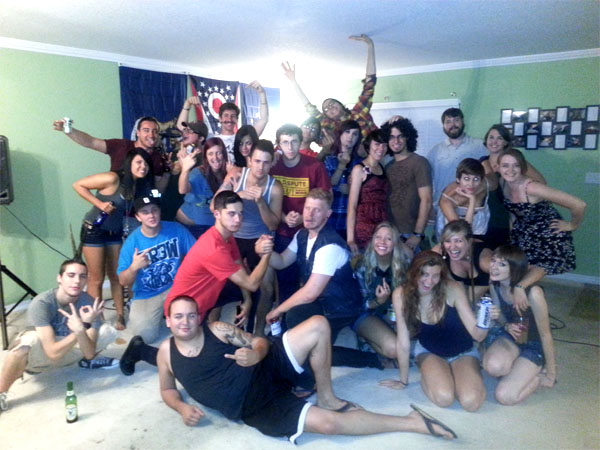 One young lady in particular asked me about the wrist-bands I wear, and what I was doing in the USA, let alone how I’d somehow arrived at her friends’ party. I loved how enthusiastic she was about what I was doing. She proceeded to tell me about what she’d been planning.

Marseille, France was the destination, an au pair the occupation, yet no plans on dates or when she might finally take the leap. The conversation went on and she explained how she was nervous, unsure about making friends, and whether they’d receive her well as an American coming to Europe. All more than reasonable concerns; you never know how the French will respond, hehe. Though drunk and probably somewhat slurred, we talked it over for a while and she seemed rather confident about going.

So I made a deal with her. I told her… END_OF_DOCUMENT_TOKEN_TO_BE_REPLACED

Today, I learned of a rather sickening situation.

Something that further encouraged my lust for moving away from London, especially by the time I have children and they need educating!

I was talking with a close friends’ younger brother, he’s 12. He was telling me about school; what’s new, what he’s doing well and what he feels about certain subjects. We quickly moved onto why I thought History and Geography are quite important, though empathised with his frustration as I too despised the lessons back when I was his age. They were dull and I very rarely felt I was learning anything I could use – pretty much the main argument about the UKs educational system.

During this conversation I explained to him why both History and Geography were important. He agreed, understood and thought about it differently and said – “Well, why don’t they teach it like that in school?”. Well said young man, well said… END_OF_DOCUMENT_TOKEN_TO_BE_REPLACED

I spent two months road trippin’ around the USA. I covered 19 states, though have covered 30 in total now. I cheated a little bit too, the last clip is actually from my last week relaxing… in Jamaica. So it’s not all USA. Anyway, I hope you get even a gist of the experience I had, and it inspires you to do something crazy.

Go for it, trust me. It’s worth the risk.

The Day I Almost Died

Eighty yards.
That’s how far we had left.

As per my last post, I was thoroughly enjoying my trip. In the past two months I have been through so much, and explored so many different places. So many new cities, so many new people.

But this is about something else. One of the most beautiful drives ever.

It was a 1,000 mile drive from Austin, Texas all the way to Phoenix, Arizona. I’d been told by so many people during my journey that Arizona would be a beautiful drive ‘where god paints the sky’. It was something I was so excited for, and rightfully so. It was spectacular to say the least.

Arizona, Where God Paints The Sky

Mountains, crazy desert land, rock formations of the likes I’d never seen, crazy open views and mini tornados everywhere. Not to mention the fact that I could see a storm in front of me and actually estimate how long it would be before I entered into it.

At this point in the trip, my friends had flown over to join for me a two week road trip and we were 2/3 of the way through, heading to Phoenix before shooting up to Las Vegas the next morning. We had two cars between the seven of us; the 1995 Ford Mustang and their big red Dodge rental car.

During a 14-hour drive you tend to switch it up a little, friends switch cars, we stop for food, switch again. It’s a good way to keep on your toes, keep yourself awake and keep things alive on the road.

I know one thing for sure, it was awesome.

Towards the last hour or so I was driving and I had two of my good friends in the car with me – Lee and Callum. Lee was in the front passenger seat to my right and Callum was in the back seat half asleep lying down. You see, the back of my car was where we took turns to sleep. If someone didn’t want to be disturbed and wanted to lie down – they’d get in the back of my car and enjoy the pillow I had waiting for them!

*this is actually being posted two weeks late, sorry*

So my first month is up and I’m leaving the State of Minnesota. Already, I’ve had a roller-coaster ride. Starting in Atlanta, Georgia with two of my buddies having an absolute blast… then making my way up to Minnesota to settle in and try to work and play at the same time.

How I’m Feeling So Far

Much like in my earlier post, I’m still feeling rather ambivalent. Really excited, a little nervous, really upbeat, kind of anxious, and I definitely still have the butterflies.

When I’m really excited…
It’s usually when I’m arriving at a new destination. I’ve jumped in the car, pointed at somewhere on the map – well, Google Maps, sorry old technology – and am on the way. That feeling of not knowing where I will stay, who I will meet or even what I’m going to do when I get there; it’s awesome.

When I’m a little nervous…
I’ve arrived at a new destination. I’ve done some exploring, I’ve checked out some bits and pieces and now I’m chilling out at a bar or something. It’s now when I’m thinking to myself, oh crap, where am I staying tonight? I’ve got a few hours to meet someone friendly or it’ll be an uncomfortable night… END_OF_DOCUMENT_TOKEN_TO_BE_REPLACED

What’s Really Important? Not What You Think!

As many of you know I decided a short while ago that I’d be taking a long trip away from the UK. It’s time to get away and try some new stuff or ‘Stop making excuses and get the f**k out there!‘, meet some new people and test out this traveling-working lifestyle.

In light of all this I’ve moved out of my flat. I’d been there over a year and it was my first home away from family – it was strange leaving that’s for sure.

It’s an odd time for me. Mixed emotions. Ambivalent if you will… END_OF_DOCUMENT_TOKEN_TO_BE_REPLACED