Helping, My Way: An Au Pair in La Ciotat, France 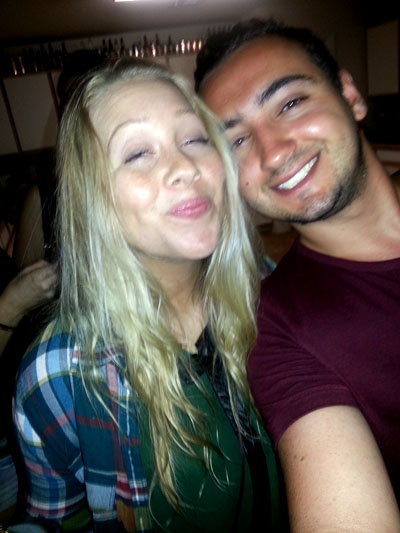 I was at a crazy house-party in Orlando, Florida earlier this year. I’d met the host, Kevan Holland, the previous year and decided to pay him a visit – this guy below about to slide down the stairs, haha!

Kevan, Sliding Down The Stairs!

To my surprise it was a totally different crowd and there were only one or two of the people I’d met the year before. So, again, it was a case of chatting away and making some new friends. Awesome, I love that. Here they are…

One young lady in particular asked me about the wrist-bands I wear, and what I was doing in the USA, let alone how I’d somehow arrived at her friends’ party. I loved how enthusiastic she was about what I was doing. She proceeded to tell me about what she’d been planning.

Marseille, France was the destination, an au pair the occupation, yet no plans on dates or when she might finally take the leap. The conversation went on and she explained how she was nervous, unsure about making friends, and whether they’d receive her well as an American coming to Europe. All more than reasonable concerns; you never know how the French will respond, hehe. Though drunk and probably somewhat slurred, we talked it over for a while and she seemed rather confident about going.

So I made a deal with her. I told her… “You move to France, and I’ll come and visit you.”

The idea here being that she’d at least have one friend, though new, come and visit if she’s feeling lonely or unsettled. It’s never easy to drastically change your life and leave everything behind. Unless you think I’m awesome, that may seem like a pretty lame deal. Nonetheless, she agreed and we shook hands. Details were exchanged, connections were made on Facebook and that was the end of it.

A few days later, I said hey, told her to keep me updated on her travel plans and that was the end of it.

Months later, I happened to notice she posted on Facebook about her excitement; she was heading to a small town just outside of Marseille, France. Of course I sent her a congratulatory message to which I got this reply…

“Yeah man! It’s all going fantastic, thanks so much! You actually made me feel a lot better about going to a different country. Thank you :)”

I’ll be honest; it made me feel good, really good. Don’t get me wrong, I’m not the reason she’s there, at all. She did that all by herself.

I guess the lesson here is that sometimes, a little goes a long way.

Oh right, yeah, the next part of the story…

Did I give it away?

Since the move to France, we’ve spoken a bit more. I mentioned that I was still willing to honour the agreement and come to visit. After a little chatter here and there it made much more sense for her to come here – she’s never been to London, I’ve been to France way too many times etc.

Of course, this would now mean she’d have to do all the legwork; booking a flight or train, getting here, hotels and all that stuff. It’s rather costly even just for a weekend. This lead to probably the nicest thing I’ve ever done for someone I barely know…

I booked and paid for her return flight :) and I feel damn good about it too!

Of course, she’s very appreciative and really excited to explore London. It’s a few weeks away yet but I am too, I get to re-look at my home town (which I don’t take advantage of at all) with someone new, and hopefully make a new long-lasting friendship in the process.

Everybody loves learning a lesson… right?

A little goes a long way – our small and somewhat forgettable (for some, not me) chat for some people, can be greatly more than it may seem.

People are as crazy as me – yes, I’m totally serious. I’ve found that the majority of people don’t take the leap. Though, clearly, some do and that’s amazing.

Making a difference in my own way – I don’t have to give to charity or a homeless person in the street to make a difference. Instead, I’m helping someone with an experience, exploring a new city, hopefully that’ll resonate with her much more.

People are number one – I think this is the most important to me. Once upon a time my brother told me… “You know what your problem is Mike, you don’t have time for people.” and it stuck, big time. And I’ve made movements to fix that in a major way over the years. Now, I’m willing to go a lot further just to make a new connection and share something with someone.

People are number one. I look forward to meeting again, Melanie :)

You can read her blog and keep up to date here.